Flying over the Grand Canyon

I realized the saying on my first visit to the iconic Grand Canyon in the state of Arizona in USA. This geological marvel has been persistently carved by the mighty Colorado River and its tributaries through layer after layer of colorful rock strata. My husband and I  had the opportunity to visit this spectacular natural wonder on a crisp July summer in 2019, the year the magnificent Canyon turned a 100 years. In February1919, this Arizona canyon was designated as Grand Canyon National Park. In 1979, UNESCO designated the Grand Canyon a World Heritage Site.

We took this unforgettable heli-tour of Sundance, Las Vegas. Sundance picked us up in a limo at our hotel, The Cosmopolitan, and dropped us back after the tour. Total time away was about four hours. We had to bring original booking docs and government photo ID as required at the Sundance office prior to departure. At the office, we were given safety briefing via hand outs, video and by the pilot himself.  It is recommended to use the washroom prior to boarding the heli, as there are no facilities on this tour until return to the airport office in 2-2.5 hours. There were six passengers and the pilot. We had the front seat next to the pilot and the ride was smooth and safe. Our pilot detailed the highlights during the heli-ride both ways, as we wore headsets to listen and speak with filler music. We flew over and around the Hoover Dam. We marveled the grandeur of the Canyon which is about a mile deep, up to 18-miles wide and almost 300 miles long.

We flew over Lake Mead and landed in the fascinating landscape of the Grand Canyon. It felt meditative as we stood at the rim of the Grand Canyon gazing at layer upon layer of rock. It was quite breezy and as the light wind splashed across our faces, we felt a renewed vigor and sense of surrender to the mighty nature ahead of us. We had time to take several pictures of the iconic landscape.

At the helicopter landing area of the Canyon is a shelter place, where we were treated to a picnic lunch of pasta salad, sub, fruit and cookies, with drink and water.

After a brief refreshment and surreal feeling, we boarded the helicopter for the return journey over the Canyon.

On the way back, the pilot flew us over the Vegas strip which was quite amazing as we spotted the Strat, Trump tower, MGM, Mandalay Bay among others.

‘A thing of beauty is a joy forever.’ – John Keats
Made time to step outside and witness the beautiful nature in the neighbourhood we seldom enjoy – a magnificent rainbow unfolding during the drive to Kuala Belait (KB), the extraordinary grandeur of golden hue dazzling across the skies during the beautiful sunset by the beach.

Drive to KB from Bandar after work over the weekend is refreshing. The towns of Seria and KB are lovely to just walk around, sight the iconic nodding donkeys which pump out oil, enjoy sunset by the beach and eat good food. Enough to get recharged for next weeks duties.

The beautiful beaches in KB offer a breathtaking view of the sunset and vibrant colorful skies.

Tip: carry insect repellant to ward of sand flies on the KB beach. 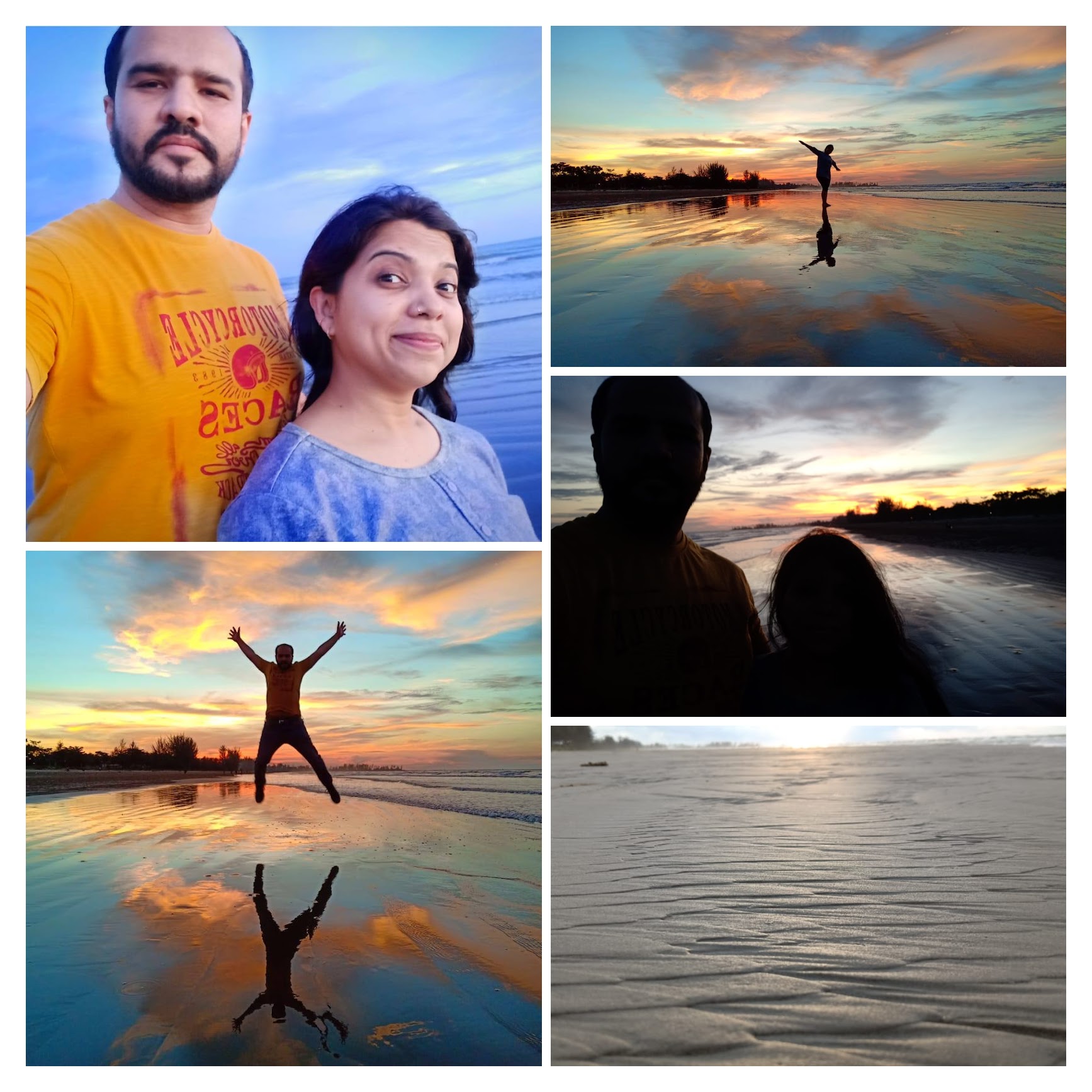 Take time to soak in nature’s delight. Its splendid beauty having a profound effect on the senses, rejuvenates and heals.

Whenever in KB, we stay at the Seaview Hotel. As the name suggests the rooms and service apartments here offer a resplendent view of the sea. The rooms on the second floor are carpeted and cozy. They have a promotion on weekends. Easy access to Coffee bean and supermarket in the ground floor.

Tip: ask for seaside rooms. The other side faces cemetery.

KB also has quiet places of culinary delight. We had a scrumptious Indian meal at the popular Zaika Restaurant which serves authentic north Indian cuisine. Their Masala lassi is ma favorite!

Dinner was a lovely surprise at the beautiful locale of Ricardo’s La Galeria serving Mexican food. The ambience was colored with Mexican theme and enlivened with soulful music. The tacos and virgin mojitos are great. 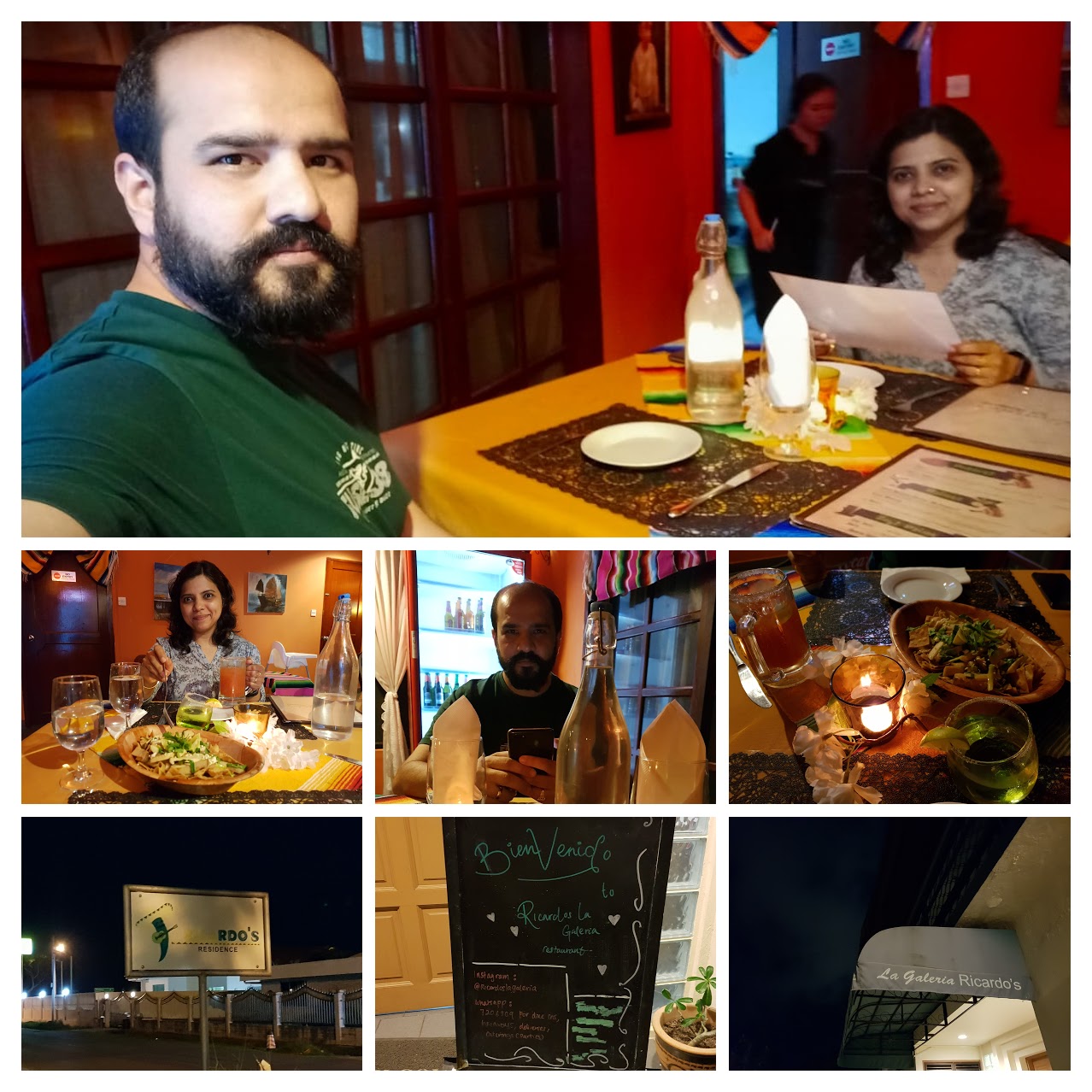 If you wish to eat authentic lip-smacking, finger-licking, Indian aloo parantha, poori bhaji, chhole bature with jeear dahi and masala chhaas for breakfast (lunch and dinner), A4 restaurant on Jalan Mckerron, is the place to go to.

Tip: Just make sure you go on empty stomach! The yum food will stuff you to breathlessness.